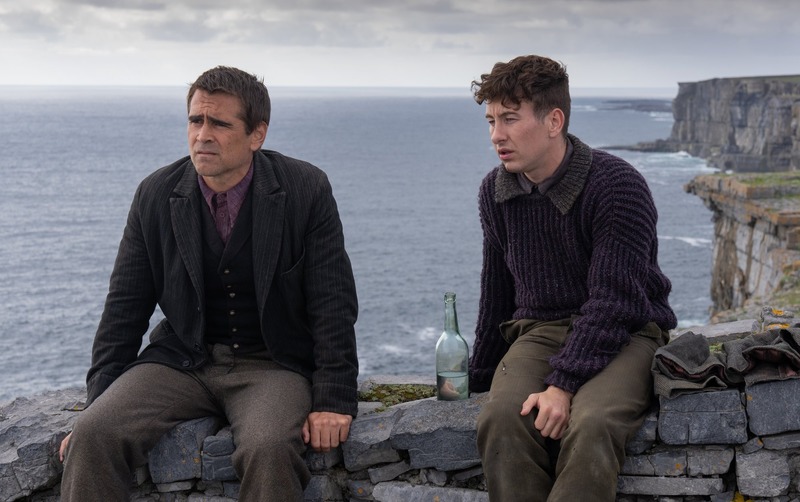 Colin Farrell and Barry Keoghan in the film THE BANSHEES OF INISHERIN. [Photo by Jonathan Hession. Courtesy of Searchlight Pictures. © 2022 20th Century Studios All Rights Reserved.]

MOVIE REVIEW
The Banshees of Inisherin

RAVING REVIEW: It was easily one of Farrell’s best performances in recent memory, but when all was finished, I didn’t know that I loved it. I do know that I didn’t hate it, though!

It’s hard to go wrong with a cast like this. Colin Farrell (MINORITY REPORT, THE BATMAN) and Brendan Gleeson (HARRY POTTER, THE BRUGES) are two well-known Irish actors that lead this film. Not to mention Kerry Condon (BETTER CALL SAUL, MCU (as F.R.I.D.A.Y.)), who has to be Rebecca Ferguson’s long-lost sister, even if they don’t know it!

Generally speaking, the film is getting universal praise, and I will agree, I liked it quite a bit. Unfortunately, it just felt like it fell short. To me, there was so much potential for it to be something extraordinary; instead, it just missed the mark. There could’ve been something else that pushed it to greatness, but it kind of simmered on good for me.

Initially, when preparing for this review, I had Barry Keoghan (DUNKIRK, ETERNALS) up with Farrell and Gleeson. While yes, he is a well-known Irish actor, he nearly ruined the film for me. Occasionally you will have an annoying character in a film, which helps move the story along. Keke Palmer in NOPE was excellent, and even though that performance drove me crazy, I didn’t like the movie. However, Keoghan didn’t do the same for me; that role took the entire film down a notch because of the performance.

Many moments in the movie had so much potential; I was impressed by the cinematography and the acting. I wanted to see more; I wanted to be sucked deeper into the story and have more rhyme and reason behind everything happening. After the credits started rolling, I was just left with mixed feelings that I was having difficulty coming to terms with.

Not that it’s a significant knock on the movie, but there was one scene where CGI was used, and it felt like a slap across the face. Not including that scene or using practical effects would’ve made an enormous difference.