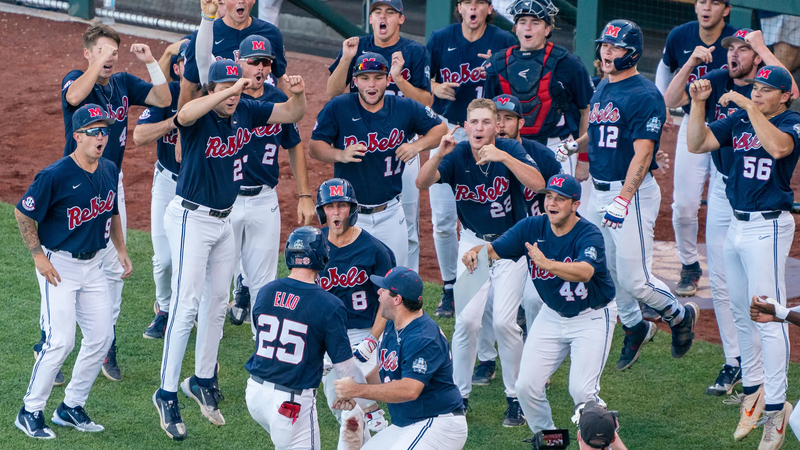 Ole Miss became the last team standing in the 2022 NCAA Division I Baseball Tournament field last Sunday. The Rebels swept through the Coral Gables regional. Then they swept Southern Miss in the Hattiesburg super regional. The Rebs then only lost one time in the College World Series second bracket to earn their spot in the College World Series Finals against Oklahoma. Ole Miss completed its two-game sweep of Oklahoma in Omaha to earn the program’s first-ever national championship. The Rebels have been considered one of the best college baseball programs in the country for the past few years, but they have had their struggles in the playoffs during that time, so it was exciting for many college baseball fans to see Ole miss finally put it together in the postseason and win the national championship.

In the first game of the College World Series Finals between Ole Miss and Oklahoma, the Rebels made a statement, winning game one 10-3. Ole Miss opened the game fast by scoring two runs in the first inning with two outs. The Rebels’ two-out success continued in the second inning as another run crossed the plate to push the lead to 3-0 after the top of the second inning. In the third inning, Ole Miss’ first baseman Tim Elko homered to right field to push the lead to 4-0. While the Rebels' offense was putting up runs nearly every inning, Ole Miss pitcher Jack Dougherty was putting on a show on the mound to open the game. Dougherty had a perfect game bid going into the sixth inning before Oklahoma opened up the inning with a single up the middle. Dougherty’s perfect five innings was the longest perfect game bid in the College World Series since the NCAA tournament expanded in 1999. After the hit to lead off the sixth for Oklahoma, the Sooners' offense finally showed up and cut the lead to 4-2 after six innings. After a couple of scoreless innings, Ole Miss’ TJ McCants, Calvin Harris, and Justin Bench broke the game open in the top of the eighth, hitting back-to-back-to-back home runs. The Rebels went up 8-3 after the eighth. Ole Miss then brought in two more runs in the top of the ninth inning and closed the game out in the bottom half of the inning to win game one 10-3.

In game two of the College World Series Finals, the Rebels and Sooners were locked into an impressive pitchers' duel. Ole Miss freshman Hunter Elliot and Oklahoma redshirt freshman Cade Horton both threw five scoreless innings. In the top of the sixth inning, it appeared that the Sooners had broken the scoreless tie on an RBI bunt single, but the batter was called out for interference and the runner was moved back to third base. The inning ended in the next at-bat, leaving the score tied heading into the bottom of the sixth inning. Ole Miss took the lead in the bottom of the sixth on a solo home run from Jacob Gonzalez. Oklahoma then stormed back to take the lead in the top of the seventh, with an RBI double and a bases-loaded walk giving the Sooners a 2-1 lead. It all fell apart for the Sooners in the bottom of the eighth, as three singles in a row tied the game 2-2 and left runners at first and third. A wild pitch scored the runner from third, giving the Rebels a 3-2 lead. Just one batter later, a second wild pitch scored another run and Ole Miss went up 4-2. Brandon Johnson came in to close out the game for Ole Miss and struck out the side to give the Rebels their first national championship in program history.