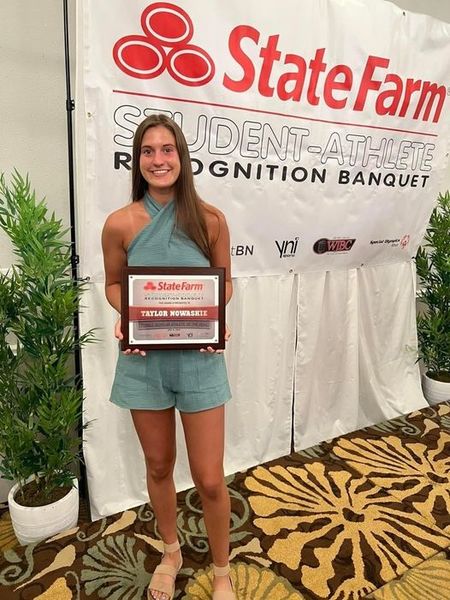 All Conference selections for the high school spring sports were just published! Many Olympia athletes earned conference and state rankings. Congrats to all athletes!

The baseball team had players in all positions make All Conference recognition. Riley McCallister earned 1st team outfielder. Many other players were honorable mentions; Zach O’Donnell as pitcher, Drew O’Donnell as catcher, Adam Swartzendruber as infielder, Cole Kindred as infielder, and Edwin Hohulin as outfielder. Edwin will be back as a Spartan next year for his senior season too! The Pantagraph All Star Baseball Game was played last week. This game is for senior intercity and area baseball players that are chosen for their academic and athletic success. Drew O’Donnell, Adam Swarzendruber, Cole Kindred, Riley McAlister and Zach O’Donnell all played in this game at the Corn Crib. This was also that last time that twins and pitcher-catcher duo, Zach and Drew got to play a baseball game together. Shortly after this night, Zach, Riley, and Cole played in the McDonald's All Star Game.

For the softball team, three girls made 1st Team All Conference honors; Danika Frazier as a pitcher, Casey Wissmiller as an infielder, and Jordyn Turner as an outfielder. Shelby Finchum was 2nd Team for infield and Julia Winterland was 2nd Team for outfield. Danika Frazier and Casey Wissmiller were also selected to the Illinois Softball Coaches Association All State Teams. Danika made it as a pitcher on the 2nd Team and Casey as an infielder on the 3rd Team. Casey Wissmiller and Brenna Elgin were selected for the Pantagraph All Star Softball Game, but Casey was unable to attend.

To end off the school year, Taylor Nowaskie was selected as the State Farm Female Scholar Athlete of the year. The Olympia Community is very proud. Congratulations to Taylor on all her accomplishments!