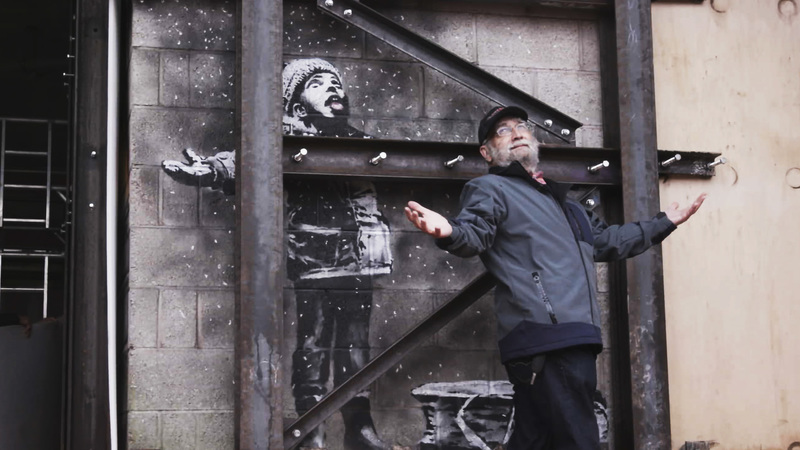 There’s no shortage of films about Bansky (BANKSY AND THE RISE OF OUTLAW ART, THE ALTERNATIVITY, SAVING BANKSY, THE BANKSY JOB, WELCOME TO GAZA, BANKSY DOES NEW YORK, THE MAN WHO STOLE BANKSY, GRAFFITI WARS, EXIT THROUGH THE GIFT SHOP!, BANKSY'S COMING FOR DINNER, and probably more that I missed,) he’s a household name across most of the world even though no one knows what he looks like. Right? That’s one of the goals that we set out to accomplish in this film. Do we find out? You’ll have to watch and see.

While there are a lot of films that have been made on, about, or by Bansky, there remain so many unanswered questions about him, his methods, and even the reasoning behind what he does. BANKSY MOST WANTED is directed/written by Aurélia Rouvier, Seamus Haley, and Laurent Richard. They take a very journalistic approach to the film, interviewing those related to previous Banksy films and those who have had first-hand experience with his artwork (from those who have purchased it to those who admire it.)

A lot of what makes his art so intriguing is the statements he tries to make with the different pieces; it seems there are no accidents in his planning. Each piece has a message to convey and does so in a whimsical way that often makes the pieces enduring. While many are opposed to his “graffiti” style work, more often than not, it’s done in areas that are already suffering, which is usually the purpose of the pieces.

The most enduring moment to me is when a woman interviewed who lives near one of the appearances of a Bansky piece is saddened but not detoured about the wall it was on being moved to another location. My viewpoint is that the lack of a wall or even a rebuilt wall in its place will be almost as poignant as the design itself.

The best thing about a documentary like this is that it’s entertaining as a standalone film and intriguing as it researches and digs into the focus of the subject. Too often, I’ve noticed some documentaries get lost in their journey and make the films a by-the-numbers project that only lays out the information they are looking into. For a documentary to be successful, it needs to tell a story in a way that will keep casual viewers attached and those dedicated to learning more about the subject. It’s just as important to tell a broad story; while we mainly focus on a few key topics here, overall, the film has solid pacing that keeps giving new information as we go along.

Thanks to dominion3 Public Relations and Level 33 Entertainment.