If You're Going to Experience One Film in Theaters This Year, Make It This One 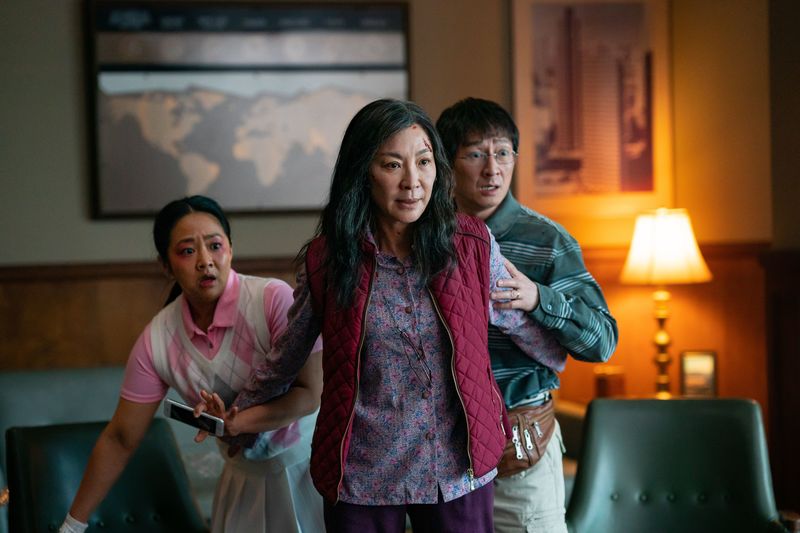 MOVIE REVIEW
Everything Everywhere All at Once

So what do THE MATRIX, MEN IN BLACK, RATATOUILLE, SPIDER-MAN, and more have to do with each other? They all play a role to some extent but at the same time not at all on what I have to consider easily one of the best films of the year (if not longer!)

So this is a complex review to write, there is so much to discuss in this movie, but as usual, I don’t want to give anything vital to the story. So this will most definitely have a spoiler section at the end. However, I beg you not to spoil it for yourself unless you’ve seen it. This is one of those rare opportunities where I feel that the trailer didn’t give too much away!

So I have to start by commending the incredible job the directors Dan Kwan and Daniel Scheinert (SWISS ARMY MAN) did at bringing their vision to life. This could not have been an easy pitch initially; thankfully, they got the okay, an incredible cast, and created what I would consider a modern-day masterpiece. I don’t say this lightly, I’ll hand out four-star reviews regularly, but five-star ones are left for films that truly move me.

Michelle Yeoh (Evelyn Wang,) Stephanie Hsu (Joy Wang,) and Ke Huy Quan (Waymond Wang) are the cement that holds the film together. All three of their performances were stellar; it felt as though each of them got the spotlight for just the right amount of time. They managed to play down their roles to let the others shine. It’s essential to balance a cast in a film like this; while Yeoh is the lead, she doesn’t take all the crucial scenes to just herself.

While the film is rated R, I feel like they don’t push it to the extent that would make most uncomfortable (outside of maybe one particular scene.) A few moments may shock some, but in general, most of the rating comes from that one scene and some coarse language throughout.

People have come at me lately, saying that enjoyment shouldn't be a large portion of my reviews. I couldn’t disagree more, and I’ll fight until the end to defend that right. This movie was spectacular; I enjoyed it from start to finish and didn’t once sit back and consciously think about the lighting, editing, CGI, etc. That’s just the niche of film critique that I often fit into; if I don’t enjoy something, I’m not going to give it a great review and expect others to enjoy it.

While this film is still somewhat limited, I hope the studio sees the positive press and continues expanding the release. I would love to have as many people see this and have the experience I did!

Okay, so now that you’ve been warned, let’s talk about how great the three main actors were in portraying so many different versions of themselves. The performance reminds me of James McAvoy’s role in SPLIT if you took it to the next level. Hsu especially took this moment to shine; she played so many versions of herself and gave each one its unique twist while keeping them all grounded to the same character at the same time. Let’s also talk about the rock scene; this was probably one of the most brilliant uses of creativity I’ve ever seen. It’s so simple yet powerful; I loved that it was more than a blink, and you’ll miss it type moment. I will say, I wasn’t a fan of the “hot dog” scenes, I get what they were going for, but it almost went too far, if that makes sense. I would’ve liked to see them go somewhat less crazy (gills, another finger, etc.) However, I can’t hold that against the film.