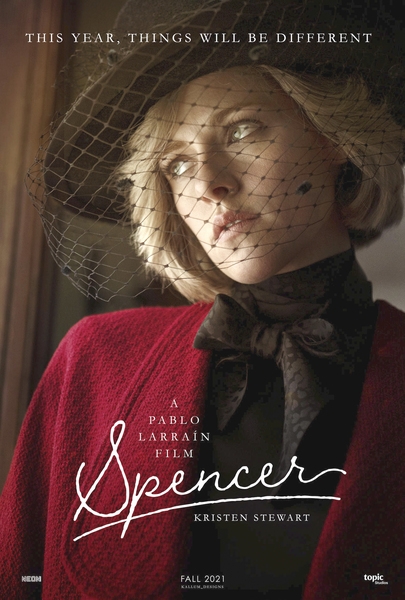 “A fable from a true tragedy,” and honesty those words were one of the film’s most significant faults. I have a hard time calling this a "biography." I’ve always been a fan of Diana, Princess of Wales. She indeed was the "People's Princess," and although her life was tragically cut short, she cemented her place in history as an icon.

Director Pablo Larraín directed one of my favorite films of 2016, “Jackie,” which was a more straightforward biopic on the late Jacqueline “Jackie” Kennedy. “Spencer” focuses on a holiday weekend in 1991 towards the end of Diana and Charles’ marriage after his affair with Camilla Parker-Bowles. While the film doesn’t pull any punches about it being a fictionalized take on Diana’s life during this period, I feel it doesn’t do itself any favors by doing so. Honestly, it would have been a far better experience if the film focused on a fictional princess instead of one of the most famous princesses in history.

Without spoiling anything, we near the line of some moments that are almost borderline horror. I have no doubts that Diana was going through some truly terrible moments, especially during this time of her life. The Royal family always took issue with Diana not “fitting the mold,” It didn’t help that she didn’t care about what they thought for the most part either. That aspect of her life made her instantly relatable to people, and part of her drive to be “normal” is a small part of likely what led to her untimely death.

I do have to say that I was blown away by Kristen Stewart’s (“Twilight,” “Charlie's Angels”) performance as a whole. Initially, I thought her accent was off, but after watching some interviews with Diana, Stewart did an excellent job. She was a fantastic lookalike, and her mannerisms (while not necessarily authentic to Diana, did fit the feeling of the film wonderfully.)

My biggest issue as a whole with the film is that it doesn’t give us more Diana. I would have loved to see the progression and more stories of Diana’s life. As I had mentioned previously, most of my issue with the film isn’t in the performance of Stewart, nor is it that I had problems with the film/direction itself. The combination of the two put this icon on the screen in such a way that left her completely vulnerable yet without any way for us to know what may or may not have been true to life.

When I left the movie, I thought more along the lines of a 2 out of 5, or maybe even lower. However, when I sat back and let Stewart’s performance separate from the fictionalized script, I gained more appreciation for the film. I still prefer 2016’s “Jackie” and how Larraín represented her on screen. However, I can’t find a lot of fault with the film nor the performance of Stewart. I will say that I feel there were probably some English actors that would’ve filled the role of Diana equally as well.

Some upcoming films that I’m excited about are “Ghostbusters: Afterlife,” “King Richard,” “tick, tick...Boom!,” “House of Gucci,” “Resident Evil: Welcome to Raccoon City,” and “Licorice Pizza.” That’s just through the end of the month!

Where to watch:
IN THEATERS NOW