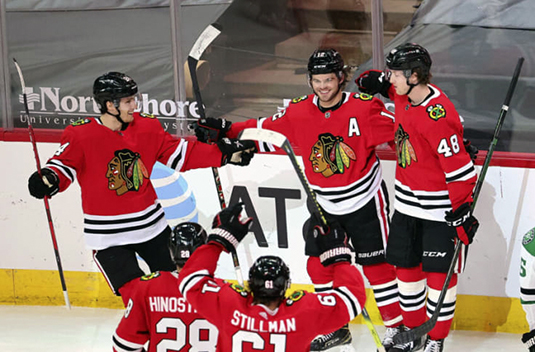 The NHL season has just gotten started this week, with the first matches being played on Tuesday. The Chicago Blackhawks are looking for a bounce back season after finishing one game under .500 in their shortened 2021 campaign. The Blackhawks really struggled with holding onto a lead last season. The one, two or even three goal leads that the Blackhawks failed to maintain last season was enough to drive their fans crazy. Another lead that they failed to maintain last season was their standing in the central division. At the beginning of March, nearly two months into the season, the Blackhawks were only three games back from first place, sitting at fourth in the division. By the end of the season, Chicago ended up finishing sixth in the division and twelve games out of first place. That was quite the drop-off for a team that looked like they could legitimately compete for a spot in the NHL Playoffs. Although the overall season was not a “success”, there were plenty of positives that came from Chicago’s 2021 season. Kevin Lankinen emerged as a potential long-term goalie option, Patrick Kane showed that he is still a great player and Alex DeBrincat rebounded from a subpar 2019-2020 season and turned into a star.

Although there are some mixed feelings about the way that the 2021 shortened season ended up, there are definitely some reasons to be optimistic about the ‘21-’22 Blackhawks. Coming into this year, Chicago hopes that their younger players, many of which made their NHL debuts just last season, will help the Blackhawks get back to the playoffs. Chicago at least seems to be heading back into the righ direction and will try to continue that trend. There are a few things that the Blackhawks can do to really ensure improvement from last season. First of all, the health of Jonathan Toews is going to be very important for the Blackhawks. After not playing last season because of chronic immune response syndrome, Toews is expected to return this season. If Chicago’s 33-year-old captain is able to perform at a high level, like he did in the 2019-2020 season, the Blackhawks will have pretty good depth at the center position. Another issue that was addressed over this offseason was improving at goalie. Although Kevin Lankinen was a solid rookie last season, the Blackhawks managed to acquire Marc-Andre Fleury in a trade with the Vegas Golden Knights. While Fleury is on the older side at 36 years old, he won the Venzina Trophy last season, the award for the best goalie in the NHL. With this big improvement, Chicago should see a major decrease in giving up leads, something they struggled with last season. Even with the improvement at goalie, the Blackhawks still needed some changes at defenseman, so they went out and revamped that group during the offseason. Chicago acquired Seth Jones, Caleb Jones and Jake McCabe in hopes of improving their 33.7 shots allowed on goal per game last season.

The Blackhawks are coming into the 2021-2022 season with something to prove after a couple unimpressive seasons. After many changes to the team in the offseason, Chicago has high hopes for this season. The front office did a great job of improving the areas that needed to be improved the most. If all the new additions can produce and the team meshes well together, the Blackhawks could get back to the powerhouse team that they once were. Blackhawks fans are hopeful that this year can be the year for Chicago to get back in the playoffs and compete for the Stanley Cup.