A Diversity of Crops

by Chloe Scroggins
Published on October 17, 2021 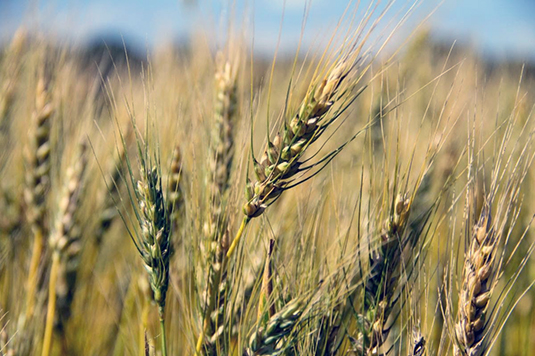 Although Illinois is known for being a leading producer in corn and soybeans, the state has a larger diversity in the crops grown than just those two crops. The climate and soil types that vary throughout the state allow for farmers to grow wheat, oats, grain sorghum, fruits, and many vegetables. Some specialty crops that are able to grow include buckwheat, horseradish, and Christmas trees. Illinois is able to grow such a wide variety because our state extends 400 miles from the northern border to the most southern part of the state. Within the 400-mile range, temperatures can vary 10 to 12 degrees, allowing for different growing seasons. For the soil, 89% of the state’s farmland is considered prime farmland according to the Illinois Department of Agriculture. McLean County has soil known as “drummer soil”, and it is some of the best soil in the world.

The elite soil and varying climate in Illinois allows for the crop diversity in our state, but what does the production of each crop (that isn’t corn and soybeans) look like for Illinois farmers?

Wheat: About 83% of wheat produced in Illinois is produced in the southern half of the state, starting at about Springfield and going further south. Wheat can be paired with soybeans as a double crop in one growing season due to the extended warm temperatures in Southern Illinois. The type of wheat that is produced is soft red winter. Soft red winter wheat does not have the level of gluten or protein in it to be used for yeast bread, but it can be used as an ingredient for flat breads, cereal, pastries, biscuits, and more items that require fine particulate flour. Although wheat doesn’t have the same impact as corn and soybeans, it is still a largely produced crop in the state.

Oats: At one time, spring oats were grown on more than 3 million acres in Illinois. Now, less than 100,000 acres of spring oats are grown. Winter oats are not extremely hardy throughout the winter months and really only have the best chance at surviving in the southern one-third of the state. In 2020, the oat yield for the state was approximately 58 bushels per acre, which was less than in 2019. However, total oat yield production has risen.

Grain Sorghum: Like oats, grain sorghum tends to reach its greatest potential in the southern one-third of Illinois. Grain sorghum is tolerant of moisture extremes and can adapt to various soil types. Over the last decade, the average yield for the crop in Illinois has been around 90 bushed per acre. After harvest, as long as a frost hasn’t occurred any less than one week prior, stubble left from grain sorghum can be used for pasture for livestock.

Fruits and Vegetables: Peaches, pumpkins, and apples are three major fruits grown in the state. While Illinois is no Georgia in peach production, the state ranked 10th in the United States in 2016 for peach production. Peaches grow well in central and southern Illinois. Illinois ranks number 1 in the nation for pumpkin production, but we will go into further explanation of Illinois pumpkin production in the edition of the newspaper that will be published on Halloween. Illinois ranked 19th in apple production. Many apples are produced in the northern half of the state. Peaches, pumpkins, and apples are only three of many fruits produced in Illinois. For vegetables, Illinois ranks high in snap beans, cauliflower, asparagus, green beans, and lima beans. In 2016, the state was the 9th largest producer of sweet corn.

Specialty Crops: Buckwheat can be grown as a double crop option for wheat when it is not possible to double crop with soybeans. Buckwheat can be used for processed flour or pancake mixes. The crop is also popular for beekeepers because one acre of buckwheat can support a hive of bees producing 150 pounds of honey. Horseradish is mainly grown in the Mississippi River Valley region adjacent to St. Louis. The moist loam soil in this region is good for horseradish production. Finally, there are many Christmas trees produced in our state as well. The two most popular species are Scotch Pine and Eastern White Pine. Both Scotch Pine and Eastern White Pine grow quickly and require frequent pruning to maintain desired shape.