Get to Know the National FFA

by Chloe Scroggins
Published on October 10, 2021 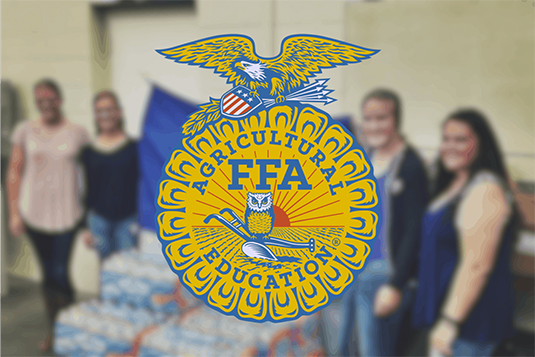 It all began with the Smith Hughes Act in 1917. The Smith Hughes Act provided federal support for vocational agriculture education. The FFA organization works for members through a three-factor model which includes classroom instruction, supervised agricultural experiences, and FFA. Without the Smith Hughes Act, the classroom instruction of agriculture would at the very least be lacking to what it is today. Next in 1925, educators at Virginia Tech formed the Future Farmers of Virginia (FFV) for their male agriculture students. The FFV was a model for the creation of the Future Farmers of America. One year later, in 1926, the first National Congress of Vocational Agriculture students competed for a National Livestock Judging Contest. Livestock judging, along with many other competitions, are a large part of what members can do in FFA. In 1927, the bylaws and constitution were written for the New Farmers of Virgina, creating the organization for African-American agriculture students. Finally, in 1928 the Future Farmers of America was established, and the first National Convention was held in Kansas City, MO. In 1929, national blue and corn gold were adopted as the official FFA colors, and still are to this day.

Now that the Future Farmers of America (FFA) is officially created, we can look back at how the organization grew into the 735,000-member organization it is. By 1930, the official FFA Creed was written by E.M. Tiffany and many high school agriculture students still remember it by heart. The official dress that allows you to spot an FFA member in any crowd was established in 1933 when the blue corduroy jacket was adopted as official dress. In a time when segregation was still present, we saw the New Farmers of America founded in 1935. Fast forward to the 25th anniversary of FFA in 1953, and the FFA is celebrated by the U.S. post office issuing a celebratory stamp. In 1957, President Truman spoke during National Convention and many U.S. presidents have attended and spoke at National Convention since then. 1965 was a historical year for FFA. It was the year that they merged with the NFA (New Farmers of America) and membership increased by 50,000. In 1969, women were allowed to join the FFA organization.

FFA is then in a new era, where the organization continues to move forward. In 1971, the National FFA Alumni Association was established. While many monumental events occurred between 1971 and 1999, including the first African-American and female national officers, we fast-forward to 1999 when the National FFA Convention moved to Louisville, KY. National Convention is currently held in Indianapolis, IN and moved there in 2006. Now, in 2021, FFA membership is at an all-time high and the organization makes an impact on students every single day.

As previously mentioned, the National FFA Organization has six national student officers. The 2020-2021 National Officer team includes: Doster Harper (President), Anna Mathis (Secretary), Paxton Dahmer (Central Region Vice President), Miriam Hoffman (Eastern Region Vice President), David Lopez (Western Region Vice President), and Artha Jonassaint (Southern Region Vice President). Harper is from Georgia and plans on serving in the U.S. Army after graduating from the University of Georgia. Mathis is from Arkansas and will work as an agricultural communicator after graduating from the University of Arkansas. Dahmer is from Missouri and wants to work in Ag Outreach and Education after receiving his degree from the University of Missouri-Columbia. Hoffman is from Illinois and plans on working as a regenerative agriculture specialist after her time at Southern Illinois University-Carbondale. Lopez is from California and will be an immigration attorney after graduating from California Polytechnic State University. Finally, Jonassiant is from Florida and strives to find a career with agriculture, health, and public policy after receiving her degree from Harvard College. These six officers will continue to lead the National FFA Organization throughout their time serving to better the organization and give the most to the FFA members.