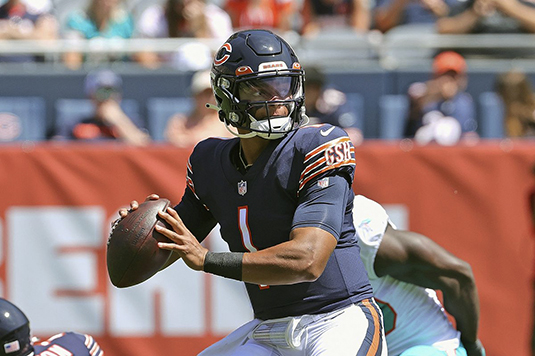 The Chicago Bears are coming off of a big time bounce back win against the Lions last week to move their record to 2-2 going into week five. The Bears will travel to Las Vegas this week to play the Raiders with rookie quarterback, Justin Fields, officially being named the starting quarterback by head coach Matt Nagy. After Fields’ first start against the Cleveland Browns in week three, there were many questions facing the Bears and their offense after only gaining 47 total net yards on an average of 1.1 yard per play. The Bears total of 47 yards was their worst offensive performance in 40 years. In his first start, Fields was hit 15 times and sacked 9 times, losing 67 yards on those 9 sacks. With only 68 total passing yards, Fields’ net passing yards for the game was only 1 yard. After this brutal performance from Chicago’s offense, they desperately needed a bounce back game against the Lions in week four. During the week between the loss to the Browns and the upcoming game against the Lions, the starting quarterback for the game against Detroit was not determined until the Thursday before the game. Justin Fields was once again named the starter for the second consecutive week over Andy Dalton and Nick Foles. Although his first NFL start was a complete disaster, Bears fans had faith in Fields and were excited to see how the rookie quarterback would come back from the loss against the Browns.

Against the Lions, the Bears came out strong, scoring on their first drive of the game. After the Bears went 75 yards for a touchdown on the first drive of the game, their defense came up big forcing a turnover and getting Chicago’s offense the ball back with some momentum. Fields hit Darnell Mooney with a 64-yard pass on the second play of the Bears second drive of the game. Deep passes have not been something that Bears fans have been accustomed to seeing in the past couple years, so it is safe to say that the 64-yard bomb to Mooney got the fans at Soldier Field excited. To cap off that drive, David Montgomery ran in for a touchdown to put the Bears up by two scores to start the second quarter. With a comfortable lead, momentum, and great support from the home crowd, the Bears offense found their groove and Fields had a much more respectable outing in his second game as a starter in the NFL. The Bears offense put up 373 yards against the Lions last Sunday, with Fields passing for 209 of those yards. After being sacked 9 times against Cleveland, Chicago’s offensive line only allowed Fields to be sacked 1 time against the Lions.

Even after Field’s impressive performance against the Lions, head coach Matt Nagy announced early in the week that the starting quarterback for the Bears week 5 matchup against the Raiders was not decided. This left Bears fans wondering, “What more does Fields need to do?” After Nagy and his staff discussed the quarterback situation, the head coach announced on Tuesday that Justin Fields will be the starting quarterback for the Bears as they move forward in the season. When the news broke that Fields would be the Bears starter, the quarterback’s family was ready to celebrate with the new QB1. When his parents asked if he wanted to go out to celebrate on Wednesday night, Fields told them that he had to stay home and watch film. The rookie quarterback said, “Because I’m trying to win this weekend. Of course, there’s some reason to celebrate, but I’m not just going to be complacent with where I’m at. I’m going to continue to grow, continue to get better and just try to work hard each and every day to get good wins on Sundays.” Justin Fields definitely is showing Bears fans that he has the mindset to be the franchise quarterback that they’ve been looking for.