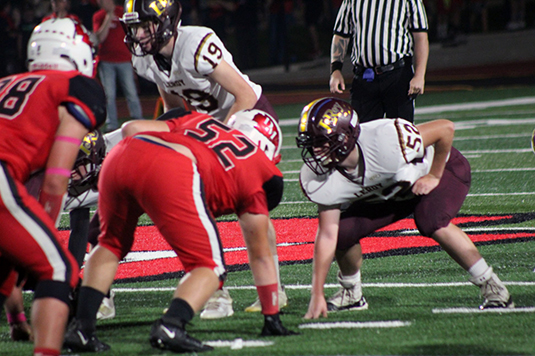 The Dee-Mack Chiefs gave fans an exciting show as part of their Homecoming festivities on Friday night in a game that had fans on their feet.

The Panthers came out swinging first and put 7 points up with just over 9 minutes left to play in the first quarter. The Chiefs pushed down the field on their first drive, ending with Brent Denniston punching past the goal line, including a  2 point conversion. In the first minutes of the second quarter, the Panthers pushed well into Chiefs territory where, despite a pass broken up by Tyce Albritton, they would just manage to sneak the ball into the end zone and kick for an extra point, making the score 14-8 in favor of the Panthers.

Marking their shortest possession of the evening, the Chiefs took their next possession down the field in 6 plays, ending with Brent Denniston running up the middle to put another 6 points on the board. Chiefs 2 point conversion failed, setting the score at 14-14. The Panthers fired back immediately on their possession and found themselves deep in Chiefs territory, eventually finding a receiver in the end zone to put the score at 20-14 after a missed extra point. The next two possessions would result in back-to-back interceptions, with Dee-Mack's Tyce Albritton finding himself in the right place at exactly the right time. The first half would come to an end with a score of 20-14, Panthers.

The second half of the game started with a failed onsides kick from the Panthers, giving our Chiefs excellent field position for their drive. However, the ball was soon given back to the Panthers by way of a fumble at about the 50 yard line. The Panthers made the most of that opportunity and put 7 more points on the board. 27-14, Panthers.

However, the rest of the game belonged to the Chiefs. Tyce Albritton would chime in with a touchdown with a 2 point conversion. Panthers turned over the ball on downs in their next possession, giving Ethan Baez the opportunity to run up the middle with a score. The Panthers tried to rally back, but they were stopped by a series of QB sacks that effectively ended the game. Chiefs would gain possession and run the clock out for a final score of 28-27.