by Erik Malmgren
Published on October 3, 2021 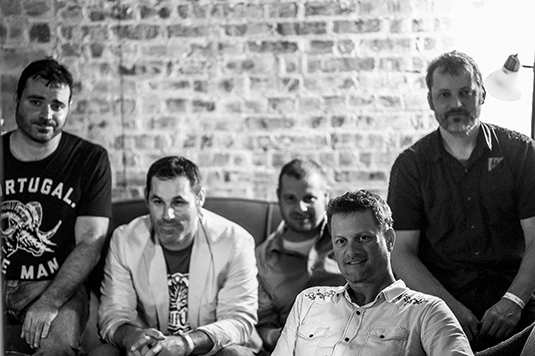 Local musicians Highway J appeared at the Mackinaw Valley Vineyard on Saturday, September 25. If the band name sounds familiar, there is a reason for that: Highway J has appeared at the Vineyard many times throughout the years, this time around for the Summer Concert Series. Composed of 5 musicians, Highway J can be best described as an exciting fusion that brings together classic rock, a dash of country, along with contemporary hits.

Drawing on over a decade’s worth of experience, vocalist Dave Combs appeared very comfortable on stage while also bringing a certain energy that encouraged attendees to hit the dance floor. His vocal transitions were incredibly dynamic, as showcased in their jaw-dropping “Babe, I’m Gonna Leave You”/“25 or 6 to 4”/“While My Guitar Gently Weeps” melody, which elicited a big crowd response. Dave’s range was also put on display with an upbeat cover of Elton John’s “Rocket Man”. Guitarists Ryan Bradle and Ryan Knox were also integral to the band's stage presence with what appeared to be a small competition between the two. This was especially apparent and fun to watch during their cover of Peter Gabriel’s “Solsbury Hill”, where it was clear that the duo was subtly trying to artistically outdo each other.

With the band’s crowd interaction, upbeat energy, and a music catalogue that appeals to all age groups; it is easy to see why Highway J is continually invited back to the Vineyard. Highway J will be playing at various local venues throughout the winter, so you’ll have plenty of opportunities to check them out for yourself. As far as the Mackinaw Valley Vineyard, this concert marked the end of their Summer Concert Series for the year. However, keep an eye on The Mail’s “Local News” section. We will be sure to keep you up to date on scheduled events to come.