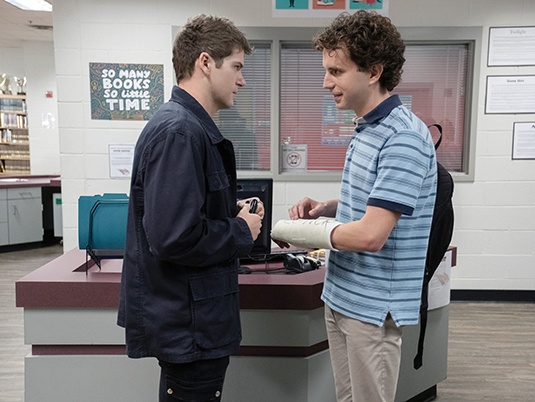 I will admit there are more ups than downs for this experience but just barely. I’ll get the negatives out of the way as per usual. The length hurt it a lot; I never got to see the stage production, so I don’t know if they added filler to pad this out or how faithful they stayed. Along with the movie’s length, I would say that its execution missed the mark at times. There were a lot of moments that I was very into the moment, only for the moment to be wasted by a poorly timed change or a joke that didn’t hit or just completely jumping the track to something else.

As I mentioned before, I loved “Dear Evan Hansen Original Broadway Cast Recording.” This love didn’t transfer as seamlessly as I had hoped it would. Especially considering that Tony Award-winning actor Ben Platt reprised his role as Evan Hansen on-screen (Platt played Evan Hansen on and off-Broadway for two years.) A lot is being made about Platt being 28 and playing a high schooler. For those who are complaining about this, welcome to Hollywood! (Stockard Channing, 33 as Rizzo in “Grease,” Stacey Dash, 28 as Dionne in “Clueless,” “Judd Nelson, 25 as Bender in “The Breakfast Club,” “Andrew Garfield, 29 as Peter Parker in “The Amazing Spider-Man,” “Rachel McAdams, 25 as Regina George in “Mean Girls,” and soooo many more!

I can say that the film was an emotional roller-coaster; even though it was predictable, I found myself on the edge of my seat during some key moments. I stopped short of tearing up multiple times (and let me tell you, that’s not an incredibly hard task to accomplish in a well-done movie.) You quickly become invested in the characters and their journey, even those underused on screen. Kaitlyn Dever (“Booksmart”) was the surprise of the film; she was the highlight for me, even over Platt’s lead. Julianne Moore (“Far from Heaven”) and Amy Adams (“Arrival”) were both surprises for me; I intentionally avoided trailers (I suggest doing so for any film that you’re excited to see, it makes the experience so much of a purer experience.)

I predict that this will be one of those films I probably forget existed in a few years. I wanted to like it more than I did. It only proves that building up a film in your mind can make for a dangerous experience.

October (my birthday month) is going to be loaded with films with some great potential. A lot of these were rescheduled from their original release dates during the height of COVID. I’m not sure what made October the landing spot, but I’m pretty excited! 10/8 - “No Time to Die” James Bond, 10/15 - “Halloween Kills,” 10/22 - “Dune,” and 10/29 - “Last Night in Soho,” and these are only the more significant releases with more mainstream appeal. There are probably twice that many that I’m personally excited for.

Where to watch: In Theaters Now