by Hayden Stork
Published on September 26, 2021 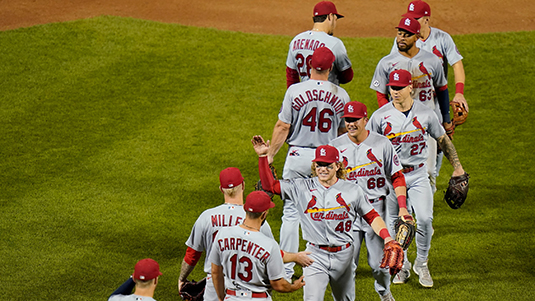 The St. Louis Cardinals have been heating up just at the right time. As the MLB regular season is coming to an end soon, the playoff picture is beginning to be set. There have been three teams already punch their ticket to the postseason, the San Francisco Giants, Milwaukee Brewers, and the Los Angeles Dodgers. As of Tuesday, September 21st, the Cardinal hold the second Wild Card spot with an 80-69 record. They are three games ahead of the Cincinnati Reds in the Wild Card race and four games ahead of the San Diego Padres. This past weekend, the Cardinals came up with a huge three game series sweep over the Padres to put themselves in a great position to seal the deal on that second Wild Card spot in the National League. The Cardinals have won their last nine games, with all of those games being against National League teams in contention for the second Wild Card spot. Just two weeks ago, on September 7th, the Cardinals had a 2.8% chance to make the postseason. After their recent surge of winning, St. Louis improved that chance to earn a spot in the postseason to a 73.7% chance.

So, what has been the cause of the Cardinals being so successful as of late? Well, for starters, St. Louis has had a rather shocking season from 40-year-old veteran starting pitcher Adam Wainwright. In 30 starts this season for the Cardinals, Wainwright has a 16-7 record with a 2.89 ERA. What has been even better about Wainwright's season is that he has gotten better and better as the year goes on. Since July 21st, Wainwright has a 9-1 record with a 1.81 ERA in 12 starts. Out of those 12 starts, the Cardinals have come out with a win in 11 of those games. Wainwright has been brilliant this season, giving the Cardinals the late season push that they needed to get in the position to be in the playoffs. With Wainwright performing so well, the Cardinals’ offense has also been getting the job done. With young guys like Tommy Edman, Edmundo Sosa, Lars Nootbaar, and Dylan Carlson stepping up in big spots in big games, the Cardinals young core is meshing very well with their great group of veteran players. This past week, outfielder Tyler O’Neill was recognized as the NL Player of the Week after batting .391 with 3 homeruns and 10 RBIs in just 6 games. In the middle of all this winning and individual success, veteran pitcher Jon Lester got his 200th career win against the Brewers. This is a

The St. Louis Cardinals have everything working for them right now. Winning their last nine games while contending for the second Wild Card spot has been an electric thing to see. St. Louis has a very solid young group of guys that are starting to step up and fill a couple very important roles. As these younger players have started seeing more and more success, the Cardinals still have guys like Nolan Arenado, Yadier Molina and Paul Goldschmidt who are successful vets in the MLB who know how to handle success. This has had a great impact on the way the Cardinals younger guys have been able to have a lot of success, without letting the pressure be too much. The Cardinals have had a very impressive last couple of weeks. If their young electric core continues to play the way they have been playing and their seasoned veterans provide great leadership in the postseason, the Cardinals are going to be a team to look out for come October.