by Erin Dederich
Published on September 19, 2021 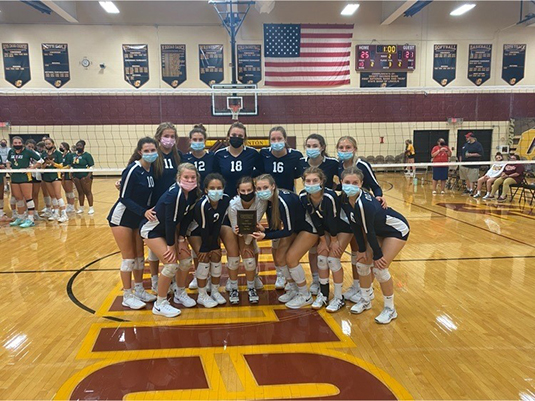 This past weekend, JV and Varsity volleyball had some strong tournaments in Clinton. After a rough start, the Varsity team climbed their way back up to play in the championship game. Olympia played against St. Thomas More who is a huge conference rival for this sport. This was a big match with plenty of competitive rallies. The Spartans fell short of the win and ended up accomplishing second place. Shelby Finchum, Madeline Conway, and Andria Ewalt made the all-tournament team. On the other side, the JV volleyball team also played very well and earned third place. Tuesday and Thursday were home games for all levels. As always, Blue Crew represented Spartan spirit strong with a huge enthusiastic crowd. JV won both days while Varsity ended up going to three sets each time and losing.

Early in the week, the JV football team had a great win over Monticello. The score was 38-14. This win advances them to a 3-0 record! The freshmen team played Unity and fought to overtime, but they were unable to complete the two extra points, coming up only one yard short. The final score of a loss was 12-14. Friday night, the Varsity team traveled to Tolono Unity for a rough game. Three Spartan players had broken hands and were playing in casts. A lot more of the boys got injured during the game because they were playing so hard. Tolono Unity ran up the score 0-42 just in the first half. The Spartans were finally able to score a touchdown in the second half, followed by another one while holding Unity to no score. Landon Horning ran the two touchdowns in while also rushing for 141 yards total. Clayton Mortimer was strong on defense with 6.5 tackles. Olympia’s lack of size and players finished in a loss of 14-42.

Girls’ golf was busy this week, with three meets in the first few days, while the boys had four meets. The cross-country team also competed in a couple of meets during the week. Girls’ swimming then earned second place as a team on Thursday in their home meet. Each individual is improving as the season moves along with lots of times dropping in the races. For the boys’ soccer team, senior night was Wednesday. The senior boys include Garrett Pitcher and Matthew Van Dyke. Congratulations seniors!