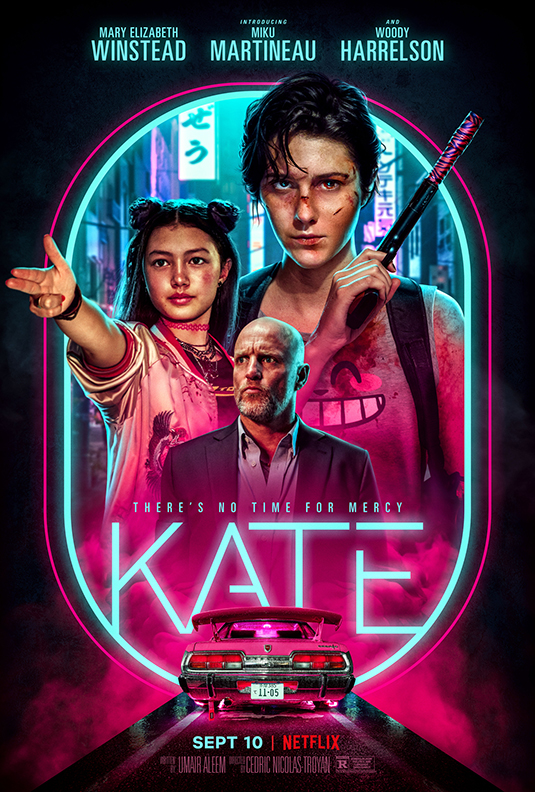 From first-time feature film director Cedric Nicolas-Troyan comes a pretty standard action film. It isn’t to say it was good or bad, and this fits into an ever-growing list of movies that are cookie-cutter copies of each other. If you’ve seen “Gunpowder Milkshake” (which, based on my review several weeks ago, you probably wouldn’t have,) “Anna,” “Atomic Blonde,” “Ava,” “Hanna,” “Lucy,” “Salt,” “Aeon Flux,” “Wanted,” Colombiana,” “Ultra Violet,” “Violet & Daisy,” “Red Sparrow,” etc. then you’ve seen everything that “Kate” has to offer.

Now to be fair, I love a lot of those films, but Hollywood has a big issue, and it only seems to be getting worse. The female action film has become very one-dimensional, and that’s unfortunate for everyone. There are some exceptions, such as “Red Sparrow,” which is everything that Marvel’s “Black Widow” should’ve been! Even then, they still relied on a lot of the cliches that all of the others do.

In general, this genre seems to rely on bright colors, a car chase of two, parodies of itself (while trying to take itself seriously), and very similar feeling fight scenes (often accompanied by a remix of a classic rock song or a modern-day high paced pop song, usually with a moment that tries to choreograph a moment in the music with intense action on screen.) I would like to see some more creativity with films from this genre. James Bond has managed to recreate itself time and time again while sticking to a pretty standard formula. I can only hope some director can do it for these films as well.

Mary Elizabeth Winstead “Scott Pilgrim vs. the World” excels in her role; she does feel like she was born to play an action hero. Ironically Woody Harrelson “Zombieland” is second-billed in the film but has a pretty minor role overall. Miku Patricia Martineau shocks as a relatively new actress with a fun counter to Winstead’s main character. Martineau keeps you on your toes with some fun one-liners that keep the film from putting you to sleep.

The further into the film that I got, the more I saw more and more connections to the other films previously listed above. Netflix tends to be a broken record; when they find a movie that gets a lot of views, they often flood the site with similar films. I’ve yet to see many “Netflix Originals” that blow me away, there have been some that are passable, but they tend to focus more on quantity than quality, making a lot of films that are “okay” instead of fewer “great” films.

If you want to watch the best this genre has to offer, I would suggest “Red Sparrow,” “Anna,” and “Lucy.” They still follow a pretty similar formula, but they also each offer their original twists. The best part is that very few of these films (even this included) were “bad.” They all provided a mindless experience that let you enjoy a popcorn flick for what they are. I only gave this two stars, but that’s not to say that I hated it. It’s just not anything that blew me away.

I’m genuinely excited about the weekend of 9/24 “Dear Evan Hansen” comes out. The same team that brought us “La La Land” and “The Greatest Showman” are also behind this.