by Erik Malmgren
Published on September 19, 2021 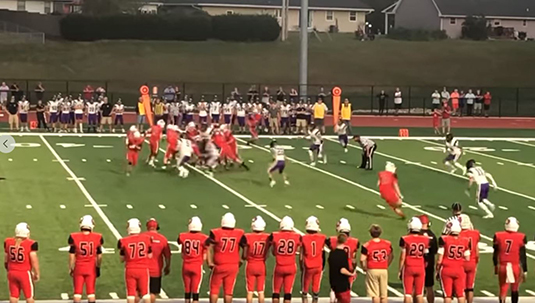 Another night of Friday Night Football is upon us as the Dee-Mack Chiefs host the El Paso-Gridley Titans. Both teams took the field for a 7 o’clock kickoff. The first quarter was incredibly exciting, starting with a Chiefs touchdown during a 6-minute drive, as Lucas Blumeyer ran the ball into the end zone. Unfortunately, a 2-point conversion attempt was unsuccessful. The resulting Titans possession would end with a fumble at their own 39-yard line, which was recovered by the Chiefs defense.

The first snap of the Chiefs drive would go high, resulting in a 2nd fumble in as many plays; giving the Titans the ball. 2 plays later, the Titans threw an impressive pass to put 7 points on the board, after a successful PAT.

The 2nd quarter was an absolute slug fest with both teams trying to out-maneuver each other, but to no avail, despite an excellent interception by sophomore Tyce Albritton. The first half would end with an attempted field goal by El Paso which fell short. 7-6, Titans.

El Paso started the 3rd quarter with control of the ball. On the first play of their drive the snap went wide, resulting in a 20-yard loss for the Titans. This drive ended in a punt; however, the next Titan possession would put another 7 points on the board for a score of 14-6.

For the start of the 4th quarter, the Chiefs take possession. Despite a valiant effort, they couldn’t get past the Titan defense. The Chiefs last possession was an attempted rally that yielded 3 excellent passes, but the Chiefs were stopped about 40 yards short of the goal line. El Paso would then take a knee to run out the clock.