by Chloe Scroggins
Published on September 12, 2021 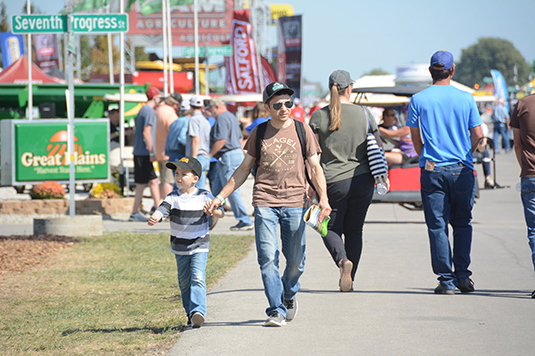 Decatur, IL welcomed the Farm Progress Show to their town August 31st through September 2nd. The annual event alternates between the Decatur location, on odd-numbered years, and a location in Boone, Iowa, who hosts on even-numbered years. The first Farm Progress Show made its appearance as an event on October 2, 1953. It was held at the Earl Bass Farm in Armstrong, IL and had over 75,000 visitors in attendance. The purpose of the event is to display progress that is currently being made in equipment, seed varieties, and chemicals. The Farm Progress Show website summarizes the show’s history into three sentences. They state, “Every day, agribusinesses and manufacturers are hard at work designing and building products. If you want a better glimpse of what tomorrow’s agriculture will look like, the Farm Progress Show is a must-stop. After all, this has been the legacy since the show began.” The show first arrived in Decatur in 2005. The Decatur location can now host over 600 exhibitors and more visitors than ever. The Farm Progress show is sponsored by Grinnell Mutual, John Deer, and Syngenta.

The 2021 show had vendors starting with every letter of the alphabet, except for “x”. The 2021 Exhibitor List was packed with the best of the best brands and companies who each brought excitement to visitors in attendance. Some very common names that could be found were ADM, Case IH, Farm Credit, John Deere, Precision Planting, and Syngenta. Exhibits were open from 8 a.m. to 5 p.m. on August 31st and September 1st, then were open from 8 a.m. to 4 p.m. on September 2nd. All exhibits have information to learn about, but many have hands-on activities, snacks, or prizes you can win through participating. There were company booths, college booths, an ice cream booth, and even more to check out!

Aside from the exhibits, there were programs and demonstrations. Almost all programs ran every day. Each day started with an opening ceremony event at Gate 1 at 7:30 a.m. Opening ceremonies were sponsored by Wyffels Hybrids. A few of the other morning events hosted included: a “Ride N’ Drive”, Ag Safety Day (Thursday), Farm Futures market update, North American Diving Dogs, a corn combining demonstration, and the Syngenta Square beer garden (which ran until the end of each day). In the middle of the day, there would be “The Noon Show” hosted by Max Armstrong. In the afternoon, some of the events included: tiling demonstrations, social media influencers, Prairie Farmer Master Farmer Awards, “This Week in Agribusiness'' update, and a FBi Qlyft system demonstration. On Wednesday at 5:30 p.m. there was one very special event sponsored by Case IH.

Lee Brice performed in concert on September 1st and debuted his new song “Farmer”. “Farmer” was introduced at the Farm Progress Show to honor those in the agriculture industry. Brice explained in a news release that, “‘Farmer’ is all about elevating the farming profession by painting a picture of the hardworking individuals and whole families, even generations of families, who dedicate so much of their time, resources, energy and lives providing for us all. The song is a celebration of the tireless and often unacknowledged work that goes into keeping families across America fed,” according to Herald & Review.

The Farm Progress Show is always a well-received event that all visitors enjoy. The show has a little something for everyone. You can watch demonstrations, learn through exhibits, see live shows, talk to college reps, take home free samples, and so much more. The 2021 show did not disappoint this year and left all annual attendees excited for next year’s show in Boone, IA.