by Hayden Stork
Published on September 12, 2021 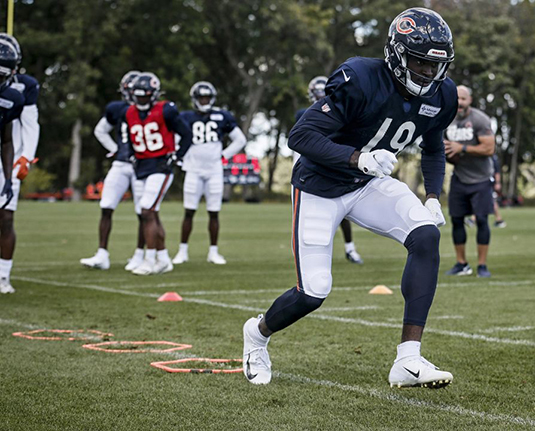 The Chicago Bears ended the 2020 season with an 8-8 record and managed to just barely sneak into the last Wild Card spot over the Arizona Cardinals. The Bears would go on to get beat 21-9 in their Wild Card game against the New Orleans Saints. After this game, a couple major changes took place in Chicago. Starting out bold, the Bears decided to not exercise Mitch Trubisky’s fifth year option, making their second overall pick from just four years prior a free agent. Going into free agency, the Bears’ General Manager Ryan Pace and Head Coach Matt Nagy were on the hot seat. Fans speculated that this offseason could have been the beginning of the Bears turning things around or it could have been the continuation of what had seemed like a steady decline. After a free agency period that brought back Allen Robinson and addressed a lot of depth needs, Nagy and Pace seemed to be on the right track. When the Bears missed out on a couple big name quarterbacks in free agency, they ended up signing former Cowboy backup, Andy Dalton, towards the end of free agency. This move was a bit of a head scratcher for most fans, but fans were generally pleased about the free agency period as a whole.

Then came the NFL Draft in April of 2021 and the Bears front office had plenty of pressure on them once again. The Bears started off strong in the first round, trading up to pick Ohio State quarterback, Justin Fields. In the next couple rounds, the Bears addressed some major needs with Oklahoma State offensive tackle, Teven Jenkins, Missouri offensive tackle, Larry Borom, Virginia Tech running back Khalil Herbert, North Carolina wide receiver Dazz Newsome, Oregon cornerback Thomas Graham Jr, and BYU defensive tackle Khyiris Tonga. After the draft, almost every NFL reporter was giving the Bears an “A” for their draft grade. With the combination of landing two top prospects in Justin Fields and Teven Jenkins, finding some great value picks in later rounds, and addressing some of their biggest roster needs, there was really nothing for Bears fans to complain about after the draft.

Heading into the 2021 regular season, Bears fans are excited to see what their new young talent can do. The goal for Chicago has always been to compete for an NFC North Division title and at the very least, find a way into the playoffs. Looking at their schedule, the Bears have one of the toughest in the league. They will have to face the NFC West, which projects as the best division in the NFL from top to bottom. They also have to play the defending champion Buccaneers, the Browns, Ravens, and Packers twice in the NFC North. These teams will definitely test the young raw talent that the Bears now have, which could be a positive thing for those guys, but it may be difficult for this team to get to 10 wins this season. After week 3 of the NFL Preseason, the Bears announced that Andy Dalton will be the starting quarterback to start the season and rookie Justin Fields will take the backup role. There have been plenty of guesses as to when Fields will get his first start for the team, but it’s all speculation at this point. The Bears are hopeful that whoever is under center will lead them to a potential NFC North Championship, even with a tough schedule. With a ton of young talent, and great veteran presence with guys like Khalil Mack and Andy Dalton, this team could click and make some noise in the 2021 NFL season.