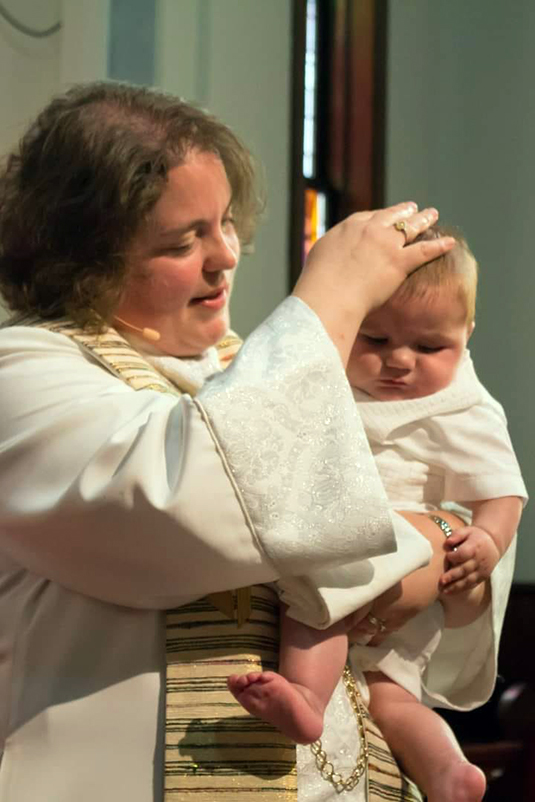 Born in Owatonna MN, Shelly Forrest knew from a young age that the ministry was her calling. Speaking of her childhood, Shelly describes brownie scouts, piano lessons, singing in both high school and church choir, as well as her summer trips to church camp. As a senior in high school, Shelly was invited to a denomination-wide retreat put on by the Methodist Church meant to encourage those who were exploring the call to ministry. By the end of the weekend, she was sure that is exactly what she wanted to do.

Shelly then went on to Hamline University and then eventually found her way to Garrett Evangelical Theological Seminary. It was during her time there that Shelly gave her first sermon centered around Colossians. Another notable event during Seminary was meeting her future husband Mitch, who also attended the school. After graduation, Shelly served in various churches in Johnston City, Monticello, and El Paso; eventually landing at the United Methodist Church here in Mackinaw.

When asked how she finds inspiration for writing her sermons, Shelly immediately mentioned the Scriptures, while also laughing and explaining that she occasionally gets ideas from a network of other pastors on-line. Another important tool for her is the “Life Application Bible”, which centers around how to best apply the Scripture to one's life. Beyond sermons, another aspect of her role as pastor are the various outreach programs the Methodist Church is involved with. Shelly spoke at length about these efforts, information for which can be found at the bottom of their homepage at www.mackinawumc.org. Shelly also made a point to express thanks to the members of the church who helped take her sermons to Facebook Live during Covid. Whether on-line or in person, Shelly’s sermons can be heard at 9:15 a.m. every Sunday morning.