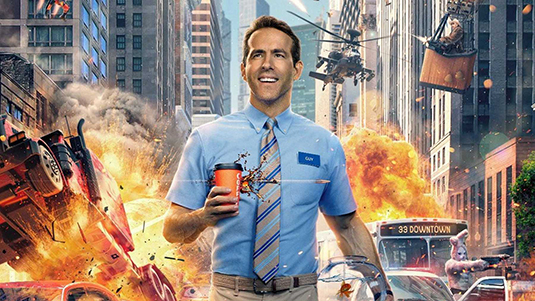 From the guy (Shawn Levy) who brought us six episodes of “The Secret World of Alex Mack,” three episodes of “Animorphs,” “Jett Jackson: The Movie (and 47 episodes),” “Cheaper by the Dozen,” “Real Steel,” and all three “Night at the Museum” films comes what is possibly one of the best “superhero” style films. In a nutshell, this was a fun and yet meta take that tackled many different things and did most of them well. They missed some moments, but overall, I would say the entire team succeeded in what they were going for. Some moments felt like they were playing in the larger video game/movie universes, similarly to how “Space Jam: A New Legacy” failed and how “Ready Player One” did so well.

The cast had some incredible high points (Jodie Comer, Ryan Reynolds, Taika Waititi, and Joe Keery); it also had some big misses (Channing Tatum and Utkarsh Ambudkar). The positives far outweighed any negatives in the film. The CGI was fun and allowed them to be a little wonky since it was supposed to be video game graphics. That does bring me to one of my more minor issues with the film. For the majority of the movie, you couldn’t tell they were in a game. About halfway, they started using a third-person kind of view: watching the characters in the “real world” on a computer screen, and at that point, they used a weird game/reality looking style on the characters. I wish they would’ve stuck with one kind or the other; it took me out of the story every time they would switch.

My only other minor gripe was that I think Taika Waititi is one of my favorite people in Hollywood, and that made it hard to buy him as the “bad guy.” More often than not, I kept finding myself trying to explain away his actions.

As for the good parts, I loved the storyline; it was simple and effective. One of the final scenes in the film was my favorite, without a doubt. I don’t want to give anything away, so I’ll simply say that it was one of the most meta moments in the film. Some of the “objects,” music, and comments in that scene probably wouldn’t have been able to be done otherwise. (keep in mind that Disney owns both “Star Wars” and the entire Marvel Cinematic Universe.) I’m also assuming it was a moment that may have been added or re-edited after Disney acquired 20th Century Fox.

I find it interesting that Shawn Levy’s next film and Ryan Reynolds’s second to next film bring them again with “The Adam Project. I hadn’t even heard of the film until today, but it has a pretty spectacular cast, so I’m already looking forward to that now! Ryan Reynolds is becoming a true A-lister; between “Deadpool” and now this, I feel like his stock will only continue to rise.

I’m not sure what my following review will be on, I am excited that I’ll be attending the Bedford Falls Film festival virtually on the 21st. I may have a small section on some of the short films that I get to watch during that in my following review as well. I’m also cautiously optimistic about the remake of “Candyman” that is scheduled to come out on the 28th.

Where to watch: In theaters and streaming on