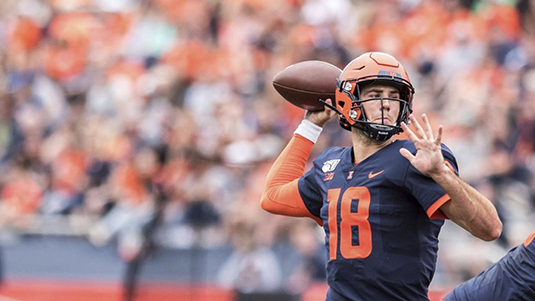 After a 2-6 season in 2020, the University of Illinois Fighting Illini Football team is looking forward to an improved season in 2021 under a new head coach, Bret Bielema. The Fighting Illini parted ways with former coach, Lovie Smith, after a five-year stint with the program. In those five years, Coach Smith and Illinois went 17-39 with no winning seasons. Illinois did not wait long to find Lovie’s replacement, hiring Bret Bielema off the New York Giants’ staff in December, on the same day as the team’s last game of the 2020 season. The Fighting Illini had no problem with hiring Coach Bielema in a timely manner, as they were very impressed with his Big Ten-heavy background. Coach Bielema is from Prophetstown, Illinois, played football at the University of Iowa and had a long run of success as Wisconsin’s head coach. As Wisconsin’s head football coach, Bielema led the Badgers to three Big Ten championships, six consecutive bowl games and a 68-24 record. This kind of success in the Big Ten is something that the Fighting Illini could not overlook.

Illinois will also bring in a new defensive coordinator, Ryan Walters, for the 2021 campaign. In Coach Lovie Smith’s five seasons with the team, the defense always relied on takeaways. In Coach Smith’s final season in 2020, Illinois’ defense ranked 47th nationally in turnovers produced. While this is a pretty good ranking for a defense, they also ranked 114th in yards allowed and 97th in points allowed. When that many points are scored against you, it’s hardly ever going to result in an opportunity to win. With Coach Ryan Walters taking over the defense in 2021, he wants his unit to have solid communication, endless effort, attention to detail, physicality and the ability to work well together to stop the run. Walters’ key man on the field is going to be linebacker Jake Hansen. Hansen has 10 career forced fumbles for the Fighting Illini. In the 2020 season, Hansen earned All-Big Ten second team and is looking forward to an even better season in 2021.

Illinois football has a lot of new faces going into the 2021 season. With veteran players like Brandon Peters, Doug Kramer, Vederian Lowe and Jake Hansen, the Illini have an opportunity to learn their new coaches’ systems very quickly and hit the ground running in the 2021 season. The Fighting Illini will open their season at Memorial Stadium in Champaign on August 28th at noon against Nebraska. As this game is the opening game for college football’s 2021 season, there is a lot of excitement surrounding the game, and the Fighting Illini will have an opportunity to show everyone what they are capable of in this upcoming season.