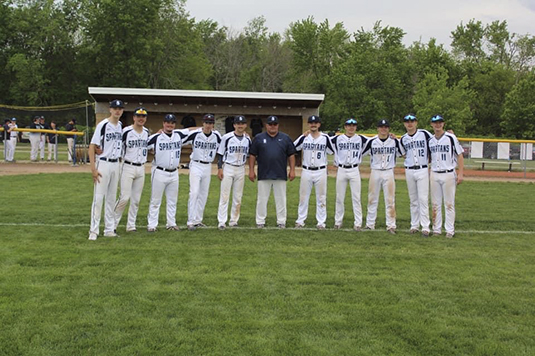 Coach Mark Finchum has been involved in coaching the Olympia Spartans baseball program for 26 years. Coach Finchum bleeds Spartan blue and white, being an Olympia Class of 1988 graduate. During his time as a student at Olympia High School, Coach Finchum played football and baseball for all four years. In his junior year of high school, Coach Finchum’s baseball team was the first team to make it to the state tournament in 1987. This was only the beginning of what was to come in the future of Olympia baseball.

In the summer of 1992, Coach Finchum’s coaching career had started. He started out coaching Legion baseball in Lincoln for Post 263. He coached there for three years, from 1992 - 1995. After his time with the Legion baseball team in Lincoln, Coach Finchum started coaching both the junior varsity and middle school baseball teams at Olympia in 1995. After 16 years of coaching junior varsity, middle school, and helping with the varsity team, Coach Finchum got the head coaching position in 2011. Ever since then, Olympia’s baseball program has maintained their winning culture. Not only does Coach Finchum maintain the history of winning, but he also keeps the culture of having successful student athletes. “For the last 26 years I’ve been blessed to coach at the same school and have the privilege to work with so many amazing baseball players but more importantly, successful student athletes who have gone on to do great things in their adult life,” said Finchum.

Coach Finchum gives a lot of credit for where the program is now to his “amazing mentor”, Coach Ron Smith. Coach Smith was the head baseball coach at Olympia when Coach Finchum started coaching. Coach Finchum says, “I thank him for giving a young kid a chance to learn and coach a sport that I absolutely love. I can’t thank him enough for that opportunity. Whether it’s been practices, games, postseasons, or state championships, there have been so many memorable moments over the years, and I am so grateful to have been a part of it. 26 years later I still have the opportunity to do what I love at the school I want to do it at. Most of all, the relationships that I’ve had with players, parents, coaches and staff over the years have been so rewarding.” Coach Finchum has not only had a program full of success, but he has also made very positive impacts on many baseball players in his coaching career.