by Chloe Scroggins
Published on August 1, 2021 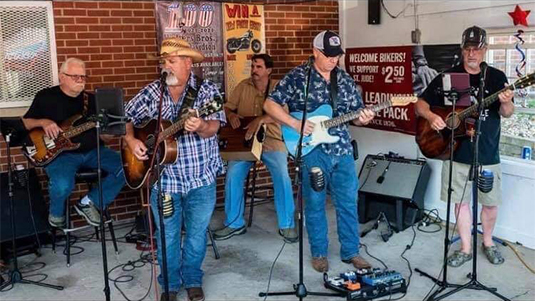 K & R Country Band is a local band that performs classic and outlaw country music. The band consists of six members who are: Kelly VanDyke, Roger VanDyke, Jimmy Birkey, Rick Tackett, Marty Davis, and Mark Martin. The band began in the spring of 2019 when Kelly and Roger VanDyke would play music at the Kentuckiana Kampground outside of Hopedale, IL. They would have 15 to 20 other people from the campground sit and listen to songs, and even sing along. Roger and Kelly began the band as a duo, and they would play for small venues. They invited Jimmy Birkey to a practice, and they all clicked together perfectly. It didn’t take much time for Marty Davis and Rick Tackett to join. Kelly VanDyke plays the rhythm guitar and leads vocals, Roger VanDyke plays the rhythm guitar and does vocals, Jimmy Birkey plays the lead guitar and does vocals, Rick Tackett plays the bass guitar, Marty Davis plays the drums, and Mark Martin does the soundboard.

In 2020, the band had to cancel many shows due to COVID, but 2021 had had a much busier schedule. K & R Country has been playing at least two or three shows a month and is booked into November with shows all over Central Illinois. This year is looking to finish with the band playing at least 30 shows. The band has played in Maroa, Bloomington, Wapella, Leroy, Heyworth, Hopedale, Tremont, Deer Creek, Minier, Morton, Groveland, and more. To find information on upcoming shows, check out the “Events” tab on the band’s Facebook page “K & R Country”. If anyone is interested in having the band play, you can contact them through a Facebook message or by calling (757) 304-2034.

Some of the artists the band will play are Johnny Cash, Charlie Daniels, Merle Haggard, Garth Brooks, Hank Williams Jr., and Cody Jinks. Those artists seem to be the fan favorites, according to band member Roger VanDyke. VanDyke stated, “The main thing we would like people to know about us is that we focus on trying to bring older classic country hits back to life. We play hit songs from the 60’s through the 90’s. The newer songs we play are Outlaw hits by Cody Jinks and Creed Fisher.”

K & R Country Band plays to have fun and entertain the crowds they play for!