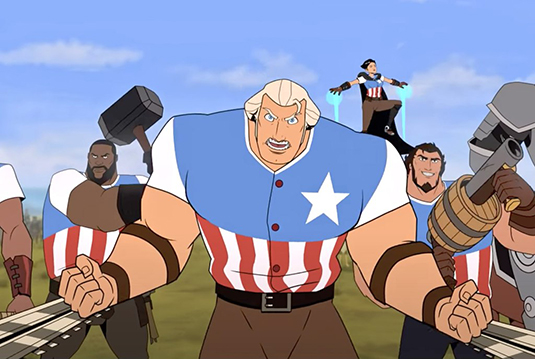 Before I get started, I need to point out that this is most definitely not a kid-friendly animation. It contains a lot of violence and crude language. I believe this may be the lowest-rated review I’ve done here so far. Sadly, the film started with a lot of potential and then quickly faded away. This short synopsis explains the basis of the movie better than I could “A chainsaw-wielding George Washington teams with beer-loving bro Sam Adams to take down the Brits in a tongue-in-cheek riff on the American Revolution.” I love an excellent satirical film. They just didn’t hit the marks in this one that they were aiming for, in my opinion.

If you follow any of my social media accounts, you’ll see that I am currently in the process of reviewing all 30+ Amityville films. I don’t know if I’ve mentioned it before, but I try to review each film on its own merits and not in comparison to others. I realize some will be terrible, but I’m trying to judge them each as a stand-alone project fairly. I’m doing the same here, this had a lot of fun moments, but the misses outweigh the hits by far.

Some great voice acting by Channing Tatum, Jason Mantzoukas, Olivia Munn, Judy Greer, Will Forte, Simon Pegg, Andy Samberg, and others; this proves my point that a voice cast doesn’t make or break a film. The animation style was great as well. A hybrid feel of hand-drawn and computer animation with a twist of anime-style served the film well.

Sadly, the satire was all over the place and felt forced the majority of the time. I don’t have an issue with them mocking the events of the revolution; I think you’d be silly to believe that any harm was meant. However, the way they mocked them felt out of touch, except for one of the final “jokes” towards the film’s end. It hit the nail on the head in terms of what the entire movie should’ve been.

I often blame the failure of a film on the director or cast; however, I think that the blame is mainly on the writer. Dave Callaham wrote this; after looking up his history of writing credits, I can see why I didn’t enjoy this. He wrote, “Doom,” the three “Expendables” films, “Zombieland: Double Tap” (so much worse than the original,) “Wonder Woman 1984” (also so much worse than the original,) as well as the new “Mortal Kombat” film. This gives me great pause; he also wrote two upcoming movies that I have high hopes for, “Shang-Chi and the Legend of the Ten Rings” and “Spider-Man: Into the Spider-Verse 2.” If he ruins those, I’ll be pretty let down. Despite loving all genres of films, I have a soft spot for the Marvel Cinematic Universe (which Shang-Chi will be part of), and I loved “Spider-Man: Into the Spider-Verse.”

I will admit, this could be a fun film to watch with a group of friends. It’s almost a parody of itself at times. I also think that this could’ve had a much better theatrical experience than the at-home viewing experience. When I caught myself laughing, I had to wonder to myself if it was really that funny or if I was just trying to force some humor from it.

I hope that my following film review will be an in-theater experience, only my third such experience since last March! I used to see a film a week in theaters at least; I’m missing them!