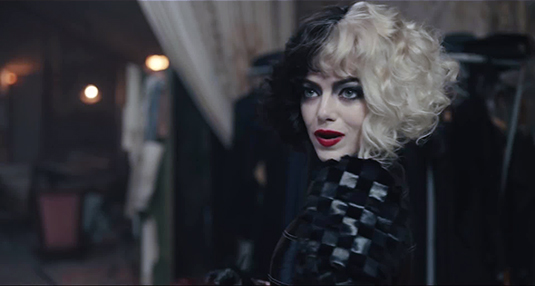 In the words of the Canadian rock band Barenaked Ladies, “It's all been done, done before,” and when I say all, I mean all. This film was almost a direct remake of “The Devil Wears Prada,” which is generous.

Okay, so the mean part is out of the way, but I had to cover that. It stuck out like a sore thumb to me during the film. Sure there were slight differences, but at its core, the two are overly familiar.

While the film lacks originality, it makes up for it in the cast; the two Emma’s (Stone and Thompson) work incredibly well together. I’m a tad bit biased as I’m a massive fan of Emma Stone, and I don’t fully know that she was the perfect choice for this role. It’s odd because sometimes I think she was excellent, and then other times I felt that she was miscast. Thompson was perfect throughout as the “villain” The Baroness. They left the film open for a continuation; it was almost overly blatant but expected as Disney loves their live-action remakes, reboots, sequels, reimaginations, etc.

Another significant portion of the film is the soundtrack, not the score (which almost played on the nerves after a while.) The soundtrack, the actual songs picked to highlight moments in the film, is trendy in recent cinema. One of the best examples would be the stellar soundtrack from “The Guardians of the Galaxy,” a lot of old classics put into a new film at just the correct times. “Cruella” was in an interesting situation as it took place in the same period as some of the songs. A lot of ’60s and 70’s hits placed perfectly throughout the film. From Supertramp, the Bee Gee’s, The Animals, The Rolling Stones, The Zombies, Nancy Sinatra, The Doors, Deep Purple, E.L.O., Queen, David Bowie, Blondie, The Clash, Black Sabbath, and more. A true exploration of London in the deepest portion of the rock’n’roll movement.

An engaging portion of the film that I usually don’t think about is costume design (so I guess that means the costuming usually is well done.) Jenny Beavan is the costume designer for “Cruella,” and I wanted to bring this up because the costumes were so over the top. It was an intentional choice and a great one, in my opinion. The film followed a very black & white theme (obviously playing off the “101 Dalmations” color scheme.) However, red was thrown in regularly and used in such a way to make things stand out. Jenny Beavan has been nominated for 10 Academy Awards, and I feel like she would be deserving of an eleventh with this film. Some of her standouts, in my opinion, have been “The Black Dahlia,” “Sherlock Holmes,” “The King’s Speech,” “Mad Max: Fury Road,” “The Nutcracker and the Four Realms,” and so many others.

Overall, I’ll likely never watch this again; honestly, that’s how I feel about most of Disney’s live-action films. It’s not that I didn’t enjoy them, but I’ve yet to see one that is even close to as memorable as their animated counterparts. Although I understand Disney’s reasoning, it’s not like they’ve been overly successful creating their original live-action IPs. So they want to feed off pre-existing ones that they know will bring in millions.

Where to watch: Theaters everywhere, and