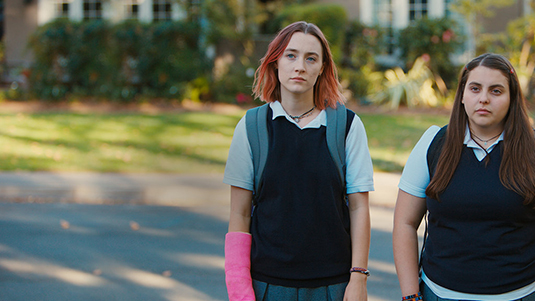 Graduation - noun
: the award or acceptance of an academic degree or diploma.

Trying to confine the experience of graduation to a film is nearly impossible. I thought long and hard about which film would best represent this. Finally, I decided the only fair idea would be to share my thoughts on three films that encapsulate the experience of those final days. These films may not show graduation experience but give the truest to form examples of what that time is actually like.

‘Lady Bird’ was and easily still is one of my favorite films. While I could never make an actual list of my favorite films, this would be on its regardless. One of the main reasons for this is the brilliance that Saoirse Ronan brings to the title character. Along with Greta Gerwig’s masterful direction, this film shows what those awkward moments in life are like and the experience that everyone goes through.

This film lets you experience the struggle of the end of high school and the unknowns of what is to come through the eyes of Ronan. She has continued to impress me with every role she takes on.
By no means is this a family film; it’s not exactly the uplifting, joyous celebration of the experience either. However, sometimes seeing the truth on screen is far more powerful than an “exaggerated” version. At the same time, the film deals with the issues; it also allows the celebration.

The irony that I only noticed while writing this is that Beanie Feldstein stars in both this and ‘Lady Bird’; she plays more of a “sidekick” in both films but still brings an incredible presence to the screen in both.

This film takes place the night before graduation; it was directed by Olivia Wilde and stars both Feldstein and Kaitlyn Dever. Two academic superstars realize that they want to cram four years of fun into one evening.

One of the most surprising moments for me was experiencing Lisa Kudrow in a post ‘Friends’ performance. I had seen her in a few other roles, but this let her shine, similarly to how she did in ‘Easy A’ (another fantastic coming of age film!)

If you haven’t seen ‘Ferris Bueller’s Day Off,’ I would suggest stopping what you’re doing and finding it however you can. Considered a classic by most and Matthew Broderick’s career-defining role, the film was a John Hughes classic and brilliant in its simplicity.

The experience of “skipping” a day of school and how to do it right, now I’m of course not endorsing skipping, just pointing out that Ferris made the most of it. Living in Chicago made it a much easier experience and on a grander scale than what it would be like on a local level. I appreciated Broderick’s performance, but it would be nothing without the supporting cast of Alan Ruck, Mia Sara, Jeffrey Jones, and Jennifer Grey. The combination and emotions they can show on-screen make this film the incomparable classic that it is and always has been.

Some other fantastic “graduation” films to check out would be:
‘Grease,’ ‘Pretty in Pink,’ ‘Ghost World,’ ‘Can’t Hardly Wait,’ ‘Superbad,’ ‘Say Anything,’ ‘Into the Wild,’ and ‘10 Things I Hate about You’.