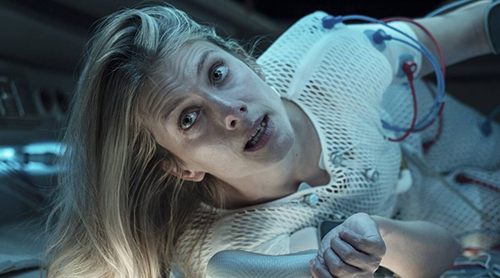 I usually wouldn’t do a full review on a foreign film, not because I don’t enjoy them but because I know there’s a limited audience for them. I decided to check this out on Netflix, and it ended up being the exception to the rule. As per usual, I do my best not to know anything about a film before I watch it. That led to an exciting discovery here; I started the movie. Almost half an hour into the adventure, I realized my subtitles weren’t on (I like to watch pretty much everything with subtitles just to make the viewing experience easier with ambient noises.) I noticed that the film I was watching is a French film, that says something that I hadn’t seen. Netflix put the English dub on by default. I usually would never recommend a dubbed movie outside of animation; this may very well be the exception to that rule.

Overall I wasn’t very impressed with the movie; I’m having a hard time putting words to how I felt while watching ‘Oxygen.’ On one hand, I was hooked to the story the entire time, while on the other, I felt like I had little to no engagement with what I was watching. It felt like the film was just going through the motions instead of being creative and genuine. Although, to be fair to the film, it’s tough to make a successful movie with the entire focus just on one person for most of the movie. Some successful examples of this were ‘Castaway,’ ‘127 Hours,’ ‘All is lost,’ and ‘I am Legend.’ These are films that made the world of their characters something that kept you connected, made you want to explore more, and made you care about what happened throughout.

The problem with ‘Oxygen’ is that I felt like I knew what would happen and wasn’t impressed with the film’s outcome. Mélanie Laurent plays Elizabeth 'Liz' Hansen, and without spoiling anything, she has the screen pretty much to herself for the entirety of the almost two-hour runtime. It’s not often that I watch a film and don’t know how to feel about it after watching it. I know when I’ve seen a movie I don’t like, and I know when I’ve seen one that I genuinely love. The in-between is a different story altogether; this wasn’t an experience that I’m likely ever to revisit. Yet, at the same time, the time flew by, and I ended the film wanting to know more after the credits started to roll.

As an odd little fact, Laurent’s father Pierre is the voice of the French version of Ned Flanders on ‘The Simpsons.’ I always find it fun to learn who voices familiar characters in other countries. Sometimes I forget how big the world is when I review English-speaking films. I promise that I won’t do foreign films regularly. I like to cover all sorts of movies so that everyone gets a chance to experience different films that they may otherwise miss out on getting to enjoy.

I’m excited that there are two films out now that I’m excited to see. ‘Spiral: From the Book of Saw,’ ‘Those Who Wish Me Dead,’ and ‘The Woman in the Window’ all are intriguing releases. Make sure to check back next week to see which of these I review. You can rest easy knowing that I share all of my reviews online; I usually save my most unique experiences for this column though.